It's really funny when I think about it, I mean I spent at least eight years of my life telling other people's stories with ease but when has come to my own I have desperately struggled. So thank you for supporting and reading this blog. Your comments of encouragement have been something I look forward to, not for my own glory but to know that what I'm doing is exactly what GOD would have me to do. My prayer is that lives are changed and hearts are stirred by knowing the power of GOD when they read this story. I have felt twinges of guilt for keeping quiet so long now that I've started opening up. It's made me realize that when GOD does something in our lives, big or small, far too often we keep quiet...scared to share it...afraid of how others will view us; when in the grand scheme of life (and eternity) GOD's view is the only one that really matters.

After Earl's proposal we immediately drove back to his parents to share the news with them. Before we got there Earl and I had devised a plan on how we were going to tell them. He still had the "other" ring in his truck and we decided we'd get that box out and give it to his mom to take back to the store, while doing all we could to make my ring as noticeable as possible. Our scheme played out even more perfectly than we had expected it to.

We walked in, sat side by side on the fireplace hearth and just started chatting with them. By this time all the company for the evening had already left and it was just the two of them. Neither was paying very much attention to us. Jerrie was curled up on the couch watching something on television, while Big Earl was sitting across the room in his favorite leather chair, rummaging through the classifieds of a paper hoping to find his next great bargain.

Earl Jr. walked over to his mom after a few minutes and handed her the ring box asking if she could just return it since I didn't want it. She opened the box and studied the ring, taking it out and admiring it. Jerrie's a little farsighted, so to get a really good look at the ring she had to hold it out (sorry Jer, but I have to). She placed the ring on one of her toes and held her foot out, twisting it back and forth so she could see the cluster shimmer and shine. Then she said, "I don't see why you don't want this ring Rock. It's beautiful, look at it sparkle. Don't you think so Big Earl...Big Earl...Big Earl look at this."

Big Earl pulled the paper down from his face and began fumbling for his glasses (he's farsighted), "What?"

He was looking around trying to grasp what the conversation was about, which he does often because his mind is always somewhere else.

Jerrie continued flexing her foot back and forth, "Isn't it pretty Big Earl?"

All the while Earl and I sat on the fireplace with my hands placed directly on my kneecaps, intending for my ring to catch even more light than the ring on Jerrie's toe. And it must have worked because as Big Earl turned to see what Jerrie was trying to show him, he instantly jerked his head back toward us and sat up screaming, "What's that?!?!?!"

Jerrie still admiring the cluster, looked up and innocently said, "What's what?"

She began walking toward us. By that time we were all a weeping mess, as she wrapped her arms around us. She took my hand and asked again, "Is it...did he?" She couldn't even muster all the words out and neither could we as we just shook our heads yes.

We walked over to Big Earl so he cold look at the ring and as he held my hand, he just sobbed and began praising the LORD, "I've prayed for this for so long. I knew GOD would answer my prayers. I didn't know how, but I knew HE would."

After we all gained our composure, we called my parents and let them know and of course we shed another river of tears. Immediately, Jerrie insisted we needed to talk about picking a date. I'm not really sure how we chose it to be honest, but by the end of the night we'd decided on November 29th, which was just 6 weeks away.

I realize that it was just four weeks from the time I gave the ring back Earl to the day that we became engaged. How that happened? I don't really know and I'm trying to convince Earl to share his story and how he got to that point so that we have a complete story. Honestly, I'd expected to become his girlfriend first. Never in my wildest dreams did I think a proposal was around the corner. Most people don't go from best friends to engaged couples, but that's exactly how it happened for us.

Now, I finally had a ring, however, there was just one problem, my dress. I've kept you waiting long enough, so here is the rest of the story about the dress.

Back in May I had decidedly picked September 7th to be the date that my dress would need to be here. However, September 7th had come and gone and the dress was nowhere to be found. When I called to see when I could pick it up, the shop began profusely apologizing. Somehow, it hadn't arrived on time. They assured me it would be there any day and they would call, but that call never came. After about two weeks, I called them again requesting to know when my dress might arrive and again, they had no clue. It really wasn't a big deal since I wasn't engaged and considering the way things went on my birthday it didn't look like I would be any time soon either, so I let it go.

As we began making plans for the wedding, I realized I now had a dilemma. That dress needed to be here sometime in the next six weeks or I was going to be buying off the rack and had invested over a thousand dollars in dress that may not show up on time. On Monday, as Jerrie and I started making a guest list and talking about colors and all the things that go into planning a wedding, my phone rang. It was Wedding Wonderland. My dress arrived that morning. As I listened intently to the woman on the other end of the phone, my heart swelled into my throat and tears of joy flowed down my face.

GOD delivered my dress on the very next business day after Earl had proposed to me. It could not have been orchestrated more elegantly than that. HE knew the very date Earl would utter a proposal to me, and HE knew the very date my dress would arrive when HE told me to buy it five months earlier. GOD is so good and so patient and so loving, I wish the world to know HIS true power. Sadly, so many miss it. GOD is so much greater than we can fathom. Our lack of faith holds us back from experiencing HIS awesomeness. I have been so blessed by my HEAVENLY FATHER, in that HE has given me so great a love story to pass on to my children and grandchildren. I will tell them that GOD has a perfect plan for you when you wait and trust HIM. HE never makes a mistake. My dress being lost wasn't an accident. Wedding Wonderland or the designer did nothing different than they ever do. FedEx or UPS didn't misplace my dress either. It was GOD. HE wanted to make sure I'd never forget what HE did for me and how HE had completed a work HE had began. It was HIS finishing touch on a story with an ending far better than anything Hollywood could ever write. Oh and if you're wondering, the letter I wrote 2 years earlier (see If You're Reading This...http://myjavawithjesus.blogspot.com/2012/03/if-youre-reading-this.html), that I couldn't bring myself to throw away, I gave it to him on our wedding night. 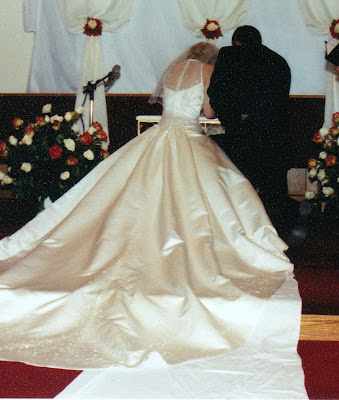 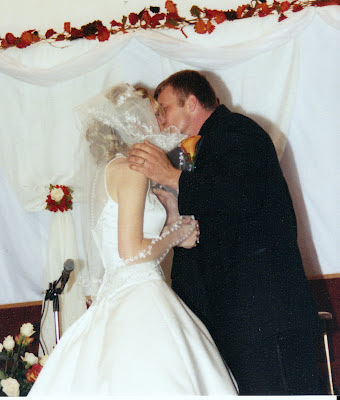 *******If this story has touched you in anyway please share it with others. People need to know the power of CHRIST when HE lives in them! Leave your comments, tell me your stories, and bombard Earl with emails and calls if you know him! Help me persuade my darling husband of 9 1/2 years to tell his side of the story!!!*******

What Will You Write About Now?